I was trying to sleep in.  I didn't really want to get up before 530am.

But the kids had other ideas.  I tried to coax them back into bed but only my daughter was cooperating.

My clever little 3 year old son made his own breakfast and his sister's and then put it all away!

When should I be concerned about Speech Delay?

I've been having my head in the sand a little, when it concerns my son, J.  He is now over 3 and his speech is still slow to come through.  He probably has a vocabulary of around 75 words and can put 2 words together (mostly Hello Mama, bye bye Poh Poh) but he can't talk in sentences.

I went to party with a group of friends who are all in the same profession, most of them are parents of children the same age as my own.  One of them, Dr C, was very concerned about J, and said I should see a speech path soon.  I was reluctant because I was hoping starting child care would get him talking more.

She sent me an article from the ABC New 24 program "Tonic".  There was this quote:


I do a little bit of a developmental screening to see whether the child seems non-verbally ok and so can the chil do puzzles and things that are appropriate at that age.  And again if the child is delayed in any of the things except talking I would say you need to do something now.  If the child is only a late talker then I would say well why don't you try to do these stimulation tips and then at two and a half let's take a look again and si fthe child is still delayed at two and a half then I might say well it seems like maybe we should think about doing something and certainly by three I would recommend speech language therapy if the child really has almost no words by three."
- Leslie Rescorla


I looked up a few other things.  From SheKnows.com, in the parenting section, there's an article called Delayed Speech in Three Year Old is a problem:

So I guess the question now is - where do I go and whom do I see?  I should be speaking 10,000 words a day to my son.  Gosh, I definitely need to improve in that regard.  And read to him more, but his attention span is so short!  I'll post updates as I progress through this trying time!
Posted by Navimie at 23:20 No comments:

OMG I deleted my England photos!

I only realised this because I was looking for my pictures of the elephant in Greenwich, when I realised... that they aren't on my computer.

And I had deleted them from my laptop last week, thinking they were already on my computer.

SO I LOST ALL MY ENGLAND PHOTOS! WAAAH!

It's not horribly horrible, because I do have a few pictures blogged, but the personal photos with pictures of my sister and me, are not there.  They aren't on the camera card either - I wiped that to make room for the eclipse.

I have little hope in trying to retrieve them from my laptop, but I can try.

Ever since I saw the trailer for Les Miserables with its star studded cast, and gorgeous sets, I wanted to see it.  Like many, I have seen the musical, I own the soundtrack, the songs and the story are familiar to me. However, since its release there have been a number of scathing reviews from movie critics:

...The musical is "sung-through," as the theater people say, crammed with nattering recitative, i.e., dialogue that is sung, either in earnest or on the fly. The camera bobs and weaves like a drunk, frantically. So you have hammering close-ups, combined with woozy insecurity each time more than two people are in the frame. Twenty minutes into the retelling of fugitive Valjean, his monomaniacal pursuer Javert, the torch singers Fantine and Eponine and the rest, I wanted somebody to just nail the damn camera to the ground. ...I'll just dream a dream of musicals gone by, directed by people who could create a rhythm and establish a style that complemented the story, the performers and everything in between.
- 1.5 out of 4 stars, Michael Phillips, Chicago Tribune

A gallery of stellar performers wages a Sisyphean battle against musical diarrhea and a laboriously repetitive visual approach in the big-screen version of the stage sensation Les Miserables. As the enduring success of this property has shown, there are large, emotionally susceptible segments of the population ready to swallow this sort of thing, but that doesn't mean it's good...
...but there is little else that is inventive or surprising about the performances. Still, there is widespread energy, passion and commitment to the cause, which for some might be all that is required.
- Todd McCarthey, The Hollywood Reporter


But there have been promising reviews as well:

A tender, transcendent and powerfully stirring adaptation of the longest-running stage musical is both old-fashioned and daring, and an ideal holiday season offering...
...Les Misérables is sweeping, as would be expected given the scope of the hugely popular stage musical from which it is adapted. But it's also wonderfully intimate, thanks to Tom Hooper's deft direction...
...Hooper (The King's Speech) was a perfect match for the material, making exquisite use of a much bigger stage and impeccable production design for a wonderfully epic effect, juxtaposed with stirring tight close-ups...
For a 2½-hour movie, it's surprisingly well-paced and consistently enthralling. The look of the film is gorgeous, but Les Mis is a success primarily because of its superlative musical performances.
- 3.5 out of 4 stars, Claudia Puig, USA Today

So what did I think?

I went in, expecting to be disappointed.  I heard Russell Crowe's singing left something to be desired.  I heard people complaining it was all singing (though really, what did they expect, it's a full movie adaptation of the MUSICAL).

The first half hour, I was a little disappointed in the singing.  The cinematography however, was fantastic.  There are things that the stage cannot show you, that a movie can.  With a movie, you can have an impressive set, you can alter the visuals by showing the actors at various stages in their lives.  The image of the convicts hauling in the massive boat as they sing "Look Down" show the desperation of their position.  Hugh Jackman as Jean Valjean was frighteningly gaunt looking as a prisoner and on parole, but cleaning up nicely as he skipped parole and went on to become the mayor of a small French town. 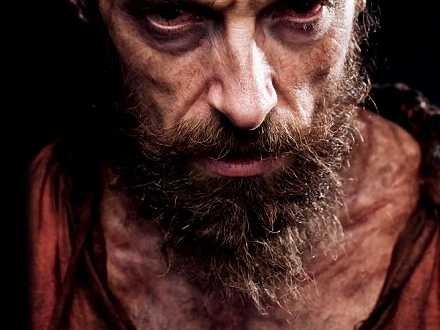 The sewing room scene "At the End of the Day" was done superbly, and showed Anne Hathaway's character, Fontine, falling from grace as she desperately turned to prostitution and destitution as she tried to scrape up coin to pay for her daughter's care by an innkeeper and his wife.

Russell Crowe's Javert is acted very well, though his singing wasn't brilliant, but his acting of Javert I thought was good, and he was well suited to the role.  The torture in his soul, trying to come to terms with a criminal who seemed to be acting like a good guy, despite his belief that criminals will always be criminals was believable.  When his life was spared by the criminal Jean Valjean, who merely accepted that Javert was "doing his job" and held him no malice, was a puzzlement, and when faced again with the ability to take Jean Valjean in custody, but having to let him pass because Javert knew it would be wrong to take down someone who had done the right thing... was too much for him and it showed.  I feel bad for Russell Crowe, for he has been touted as being the let down of the movie, whereas I didn't feel that was the case at all. Two actors in the musical surprised me with how fantastic their vocals were.  Samantha Barks who plays the grown up Eponine, did a heartrending rendition of "I dream a dream" in the miserable pouring rain, which emphasised the desperation of her one sided love situation.  Eddie Redmayne did an amazing job portraying Marius, with superb clear notes and bringing a depth to Marius that I never seemed to view him with when I watched the musical.

One particular scene in the movie is also much more moving and stirring than in the musical - when they are singing "Red and Black" within the cafe, the night before the revolution.  The song with those scenes really make the words stand out, and made me realise how brilliant the lyrics to the songs really are.

The comic relief supplied by the Innkeeper and his wife, played by Sacha Baron Cohen (of Borat fame) and Helena Bonham Carter was superb, just as I remember it in the musical. 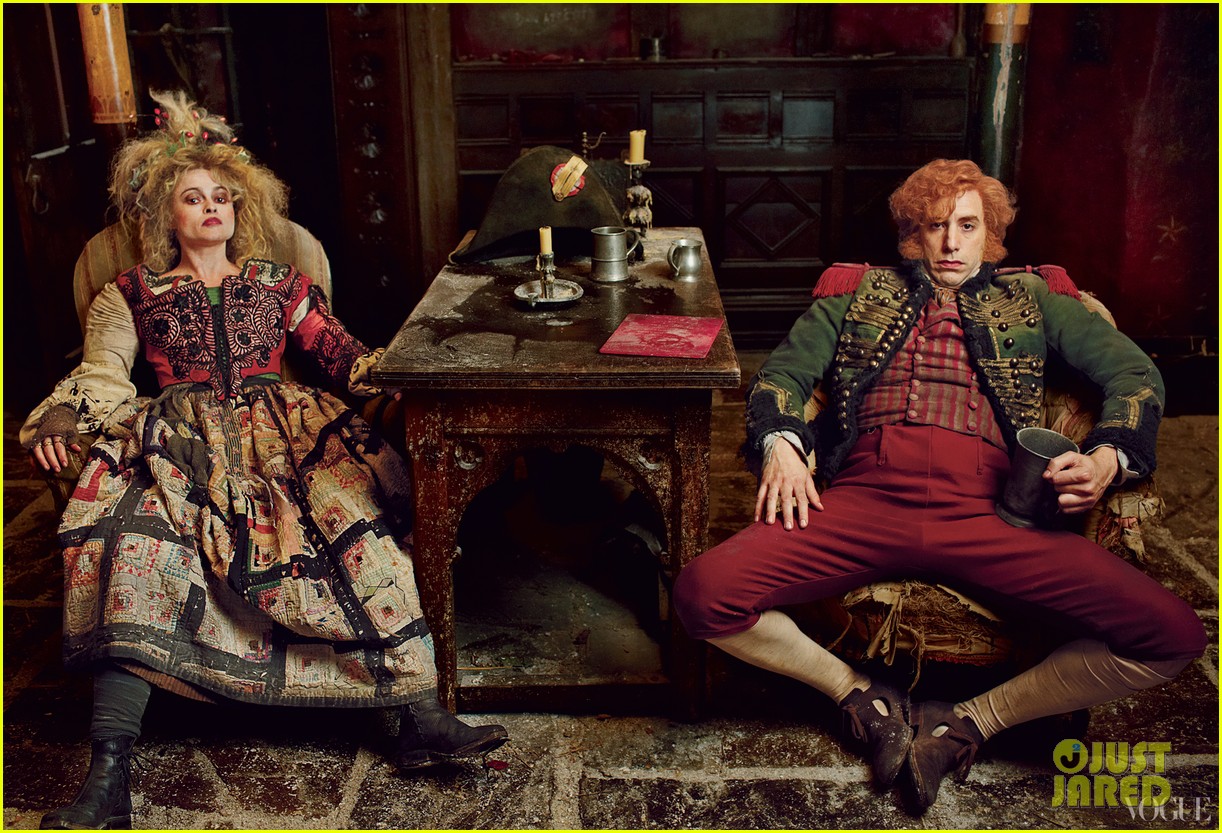 This scene is particularly cool to me, because I actually SAW this set when I was in England in April 2012.  I was in Greenwich and we saw the elephant and a market like scene and wondered what it was.  Now we know! The great difference between a musical and a movie, especially for a production such as this, is that a musical is about the music with a minor emphasis on acting, whereas in the movie, it's the opposite.  The director did make the actors sing all their own songs and added the accompanying music afterwards, which makes it still a very good musical production as they are actually singing and not lip syncing.  Watching the movie is so much more emotional - there were no tears shed during the musical from the emotion of the story, maybe wet eyes from the beauty of the music.  But in the movie, I cried... a LOT.  In the musical, I found the interaction between Jean Valjean and Javert to be the most interesting interaction, and the whole love triangle between Marius, Colette and Eponine not as engaging, but the songs were entrancing.  In the movie, I feel so much more involved, so much more empathetic to the love of Marius and Colette, and also of Eponine. 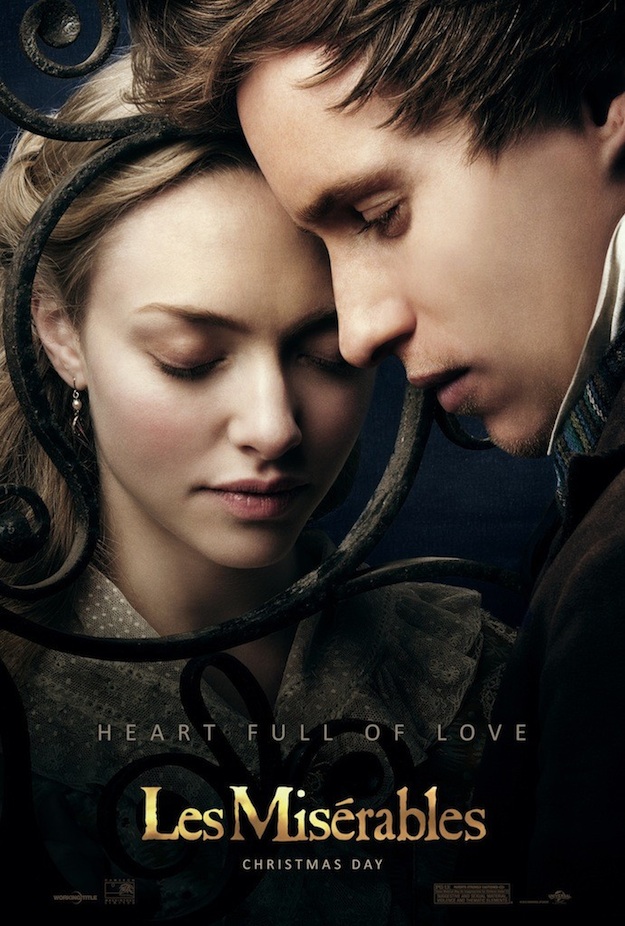 One thing remains the same, in both the musical and the movie, and to me it is the superfluousness of Colette.  I feel like she plays no hero, no role in the whole show, and is merely a little flower figurehead.  But if I think on it more carefully, she is the goodness in the film.  Because of her, Fontine has to fall from grace.  And because of her, Jean is moved to love, and to rescue Marius for her future.  She may not be a heroine but she merely represents an angel of goodness, a beacon of light for those other characters who have to deal with a struggle in the story.

If you are a fan of the musical, I would recommend watching it.  If you are FANATACAL about the music, you will probably be disappointed.  But if you want to see the emotion behind the story that is usually overshadowed by the beauty of the music, then this movie, will open your eyes to that and I am sure, like I, you will love it as I did.  Bring some tissues.  I used about 3.
Posted by Navimie at 18:10 No comments: