I love this dress from Cue

I have a few items in my wardrobe that I absolutely LOVE. This dress I bought from Cue during the Boxing Day sales is one of them, and embarrassingly I wore it 3 days in the same week and saw the same person twice! 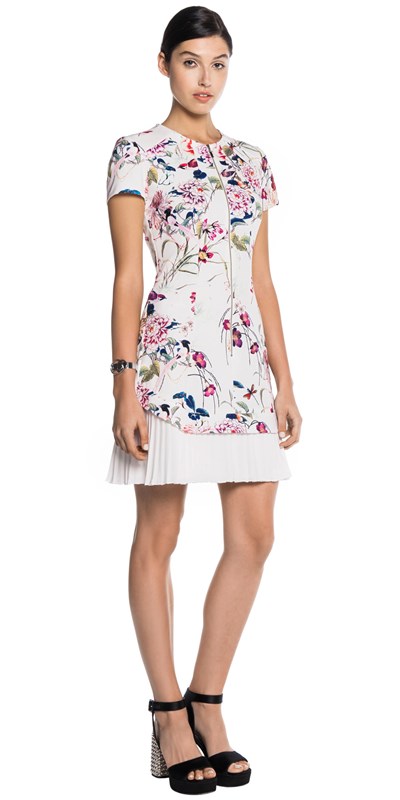 When I first saw this dress I thought it was a top with a pleated skirt. However it was a dress with pleats at the bottom and the front zip is so convenient and the print so feminine! It is my new favourite dress and each time I have worn it I have received lots of compliments. So girly girl!
Posted by Navimie at 15:30 No comments:

Chicken Diaries - Managing over the summer

This summer has been dreadful. Fortunately Spotty survived her heat stroke and I took a few measures to try to keep the chickens cool. There were even hotter days over January and February with the temperatures soaring up to 46 degrees Celsius, and it was fortunate that those days someone was at home with the chooks to keep their water changed and cool.

I came across something on Raising Happy Chickens about Heat stroke and it listed 10 signs of heat stress. Poor Spotty had 9 of them!

1. Panting.
Chicken's can't sweat so they pant. I see this when the temperature is above 33 degrees or so.

2. Rapid breathing.
If they are also not eating much because of stress this can be a bit of a vicious cycle, increased work and energy used but not much reserve.

3. Loss of electrolytes.
Apparently this causes depletion of calcium - and I had a lot of shell-less eggs which is probably due to the electroylte imbalances.

4. Wings are outstretched and feathers more erect.
I see the chickens with their wings outstretched a lot in the hot weather, especially the smaller hens. I don't notice it as much in my heavier chooks which is probably why they are more prone to overheating.

5. The bird stops eating, and drinks large amounts of water.
By the way, chooks don't like warm water! So they will drink cool water preferentially and I noticed they run straight for the new water I put out. On one of those 46 degree days the water was so hot it was probably on the hot side of a hot bath!

6. Diarrhea.
Raising Happy chickens said this was directly related to drinking more, but I think that stress will play part of this as well. Bubbles was still having diarrhoea 3 days after those 46 degree days. This will contribute a lot to that electrolyte loss!

7. The chicken become listless, droopy and disinterested.
Well, that will happen when sick. This is where Spotty was at. I am surprised it is at number 7 - I would have thought it would be at number 9.

8. Egg production and quality is likely to be reduced
My chooks don't lay on hot days and I don't expect them to with all their energy spent on keeping cool. I have had a LOT of shell-less eggs this past month - probably around 8 or so? - which I directly attribute to the heat.

9. Staggering, disorientation and seizures.
Spotty could not walk. I think if I hadn't intervened, she would be dead. I think I was very lucky she survived reaching this severe heat stress!

10. Collapse of system and death.
Well, that speaks for itself.

So here are my backyard tips for keeping my chickens cool.

- Plenty of shallow buckets of water

I have recycled disposable scrub bowls from work and stockpiled them at home and they are perfect for placing water out all over the chook's ranging area. I change the water when it gets hot, and try to put some in each of the spots that gets shade during the day.

- Allowing the chooks the full range of the garden

I have their inner enclosure and then the whole garden. On usual days I just let them free range in the enclosed area which is around 25 square metres. On hot days they can move to the shade near the house, or hide in the dirt in the corner of the garden.

I have a watering system which sprays a mist and I pull it out of the watering area to mist a patch of grass nearby. Unfortunately the chooks don't like being sprayed with water! But if they do, it's something to keep them cool. The grass at least gets a bit wet so technically by evaporation it should be cool as well.

They are actually a bit nervous about the bottles floating in their shallow scrub bowls but it does keep the water cool if I'm not at home to change it!

There are many other ideas that people have had, including frozen treats to give to the chickens, or watermelon, but so far, in those 45 degree temp days, the chooks manage to make it through without dying or getting as bad heat stroke as Spotty did.
Posted by Navimie at 01:43 2 comments: